The seventh annual Fire Invitational was held from Aug. 23-25 at the Libertyville Township Soccer Complex in Libertyville, IL.  164 teams from 23 clubs across the region participated in three days of competition, traveling from across the state with representatives from Indiana, Michigan, Missouri, and Wisconsin.

For many, this tournament kicked off the fall season and allowed teams the opportunity to see where they stand in their division and as a team as the season begins.

“This was a very productive pre-season event for us," Ryan French, executive director of Chicago Fire Juniors North Shore, said. "Each team was able to receive competitive game minutes and begin to work on how they'll play during the season this year…It was a well-organized event made even more enjoyable with this year's excellent weather.”

The 2019 tournament saw the introduction of Finals for all 9U-14U divisions, which made for exciting games on Sunday afternoon as teams competed to be champions of their age groups and divisions. All 15U-19U divisions continued as a showcase format with all teams playing three games.

Outside of the competitive games, participants and families had the opportunity to enjoy the FireFest area, which included an array of games and prizes presented by tournament sponsors including Barilla, Meijer and Adidas. Players also had the chance to challenge the Chicago Fire’s very own eMLS player, Enrique Espinoza, to a game of EA Sports' FIFA and meet the Fire’s mascot, Sparky.

The Fire would like to thank all the clubs and teams that participated in the seventh annual Fire Invitational and congratulate all of the Champions and Finalists (listed below). Additional thanks to the weekend's 80+ volunteers as well as NovaCare and the support of their athletic trainers. 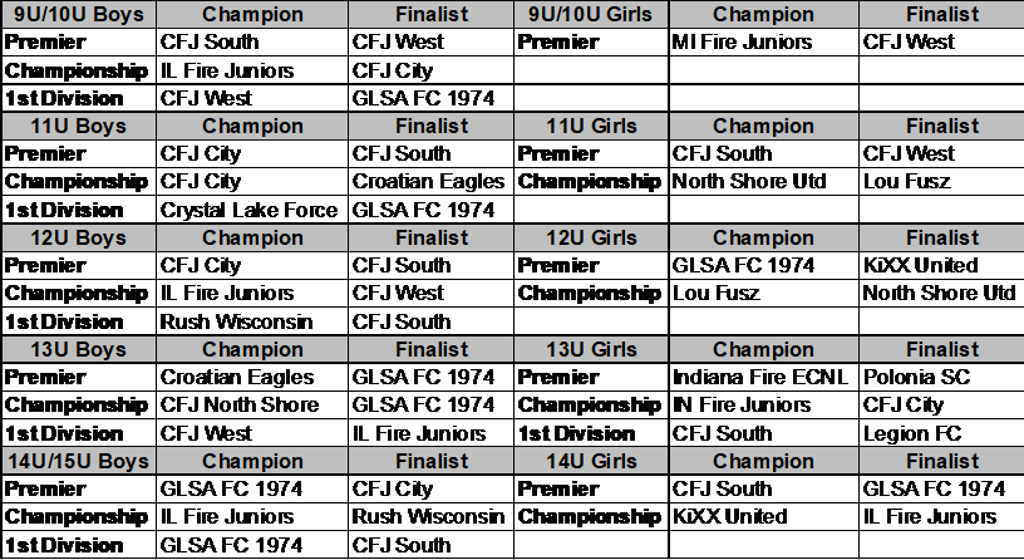